The World’s Dirtiest Fuel will be Banned from Arctic Shipping. Here’s How.

By Sian Prior & Dave Walsh

The Clean Arctic Alliance has good news to share regarding real progress towards a ban on the use and carriage of heavy fuel oil (HFO) as marine fuel in Arctic waters.

In mid-April, at the HQ of the International Maritime Organization (IMO), the United Nations body which governs international shipping, the Marine Environment Protection Committee (MEPC 72) agreed to move forward on developing an Arctic HFO ban.  The Clean Arctic Alliance was there in force, with an international delegation from Canada, Denmark, Germany, Ireland, Italy, Netherlands, Norway, Russia, Spain, Sweden, Belgium, US – including Alaska, and the UK.

This is exactly what the Clean Arctic Alliance is campaigning for – and while there’s much to celebrate, there’s still a long road to getting the ban in place. Public support – through initiatives such as the Arctic Commitment – have been instrumental in raising awareness of an the urgent need for an Arctic HFO ban,  which will help protect both the marine environment, and the communities who depend upon it. The global community is beginning to regard an Arctic HFO ban as being the obvious, and only way forward.

Heavy fuel oil is a dirty and polluting fossil fuel that powers ships throughout our seas and oceans – accounting for 80% of marine fuel used worldwide. With climate change fuelling high winter temperatures and driving sea ice melt, Arctic waters are opening up to more shipping. As the sea ice recedes, larger, non-Arctic state-flagged vessels running on HFO are likely to divert to Arctic waters in search of shorter journey times. This, combined with an increase in Arctic state-flagged ships targeting extraction of previously non-accessible resources, could greatly increase the risks of HFO spills. Unless, of course, HFO is banned.  Around 75% of marine fuel currently carried in the Arctic is HFO; over half by vessels flagged to non-Arctic states – countries that have little if any connection to the Arctic.

Already banned in Antarctica, if HFO is spilled in cold polar waters, it breaks down slowly, proving almost impossible to clean up. A HFO spill would have long-term devastating effects on Arctic indigenous communities, livelihoods and the marine ecosystems they depend upon. HFO is also a greater source of harmful emissions of air pollutants, such as sulphur oxide, and particulate matter, including black carbon, than alternative fuels such as distillate fuel and liquefied natural gas (LNG). When emitted and deposited on Arctic snow or ice, the climate warming effect of black carbon is up to five times more than when emitted at lower latitudes, such as in the tropics.

When we launched the Arctic Commitment in January 2017 with expedition tour operator Hurtigruten, our demands seemed ambitious. Yet, less than six months later, during the IMO’s MEPC 71 meeting in July 2017, member states agreed to consider how to address the risks associated with the use and carriage of heavy fuel oil by ships in the Arctic.

This surprise move put HFO on the agenda of the 72nd session of  this April’s MEPC72 meeting, where a proposal for a ban on the use and carriage of HFO as fuel in the Arctic was co-sponsored by eight countries – Finland, Iceland, Norway, Sweden, the United States, Germany, the Netherlands, New Zealand. Three IMO Members submitted papers raising concerns, but agreed with the overall need to consider mitigation measures – Russia, Canada, and the Republic of the Marshall Islands.

During the meeting, many other countries backed the proposal – with several also giving consideration to the Canadian proposal to assess the impact of a ban on coastal communities, including: Australia, Belgium, Czech Republic, Denmark, France, Estonia, Ireland, Japan, the League of Arab States, Poland, Portugal, Spain, Switzerland, and the UK.

Denmark is the sixth Arctic State (out of eight) to support the proposal for the HFO ban. As we expected, China supported Russia, while the Bahamas – a large flag state – supported the Canadian and Marshall Islands position. A number of industry bodies spoke against moving to a ban, preferring to assess the impact first, and try other mitigation measures first.

The Clean Arctic Alliance staged two side events during the meeting, with  strong attendance. The persuasive and, and often shocking testimonials from the speakers – and follow up responses from national delegations, surely helped drive support for the proposal for an Arctic HFO ban. 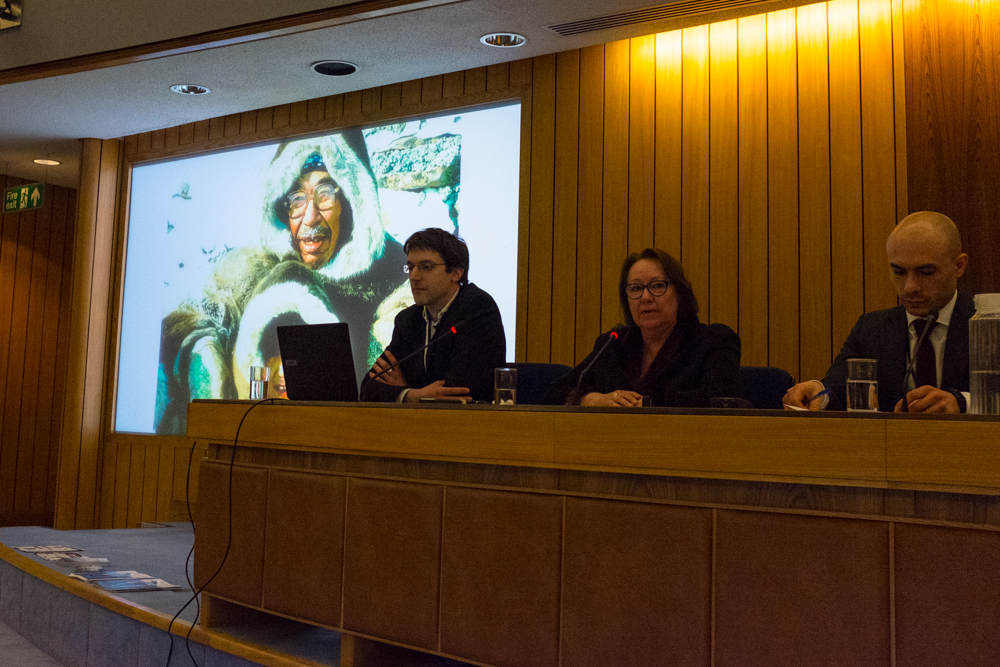 During the second – also well-attended event, The Climate Crisis: A message from the Arctic, Dr Dirk Notz, of the Max Planck Institute for Meteorology – laid it out loud and clear – demonstrating the impact of every tonne of heavy fuel oil burned, melts away Arctic sea ice. Sheila Watt-Cloutier, an environmental, cultural and human rights advocate from Canada, delivered a powerful and moving speech:

“Everyone benefits from a frozen Arctic and that everything is connected and we can no longer separate the importance and value of the Arctic from the sustainable growth of economies around the world. Everything is connected through our common atmosphere, not to mention our common spirit and humanity. What affects another, affects us all. We know that as the Arctic melts, other places such as the Small Island Developing States are sinking.”

Faig Abbasov, Transport & Environment and Clean Shipping Coalition – another Clean Arctic Alliance member, discussed the effects of global shipping emissions. while Jørn Henriksen, of expedition cruise operator, Hurtigruten – which co-launched the Arctic Commitment with the Clean Arctic Alliance in 2017, demonstrated how getting heavy fuel oil out of the Arctic benefits the cruise industry – and the polar environment.

So what happens next?

The proposal for the ban on HFO, along with other measures have been bundled up into what’s known as “scope of work” and will be sent to an IMO technical sub-committee for evaluation and development in the early part of 2019, provided sufficient information on a methodology for assessing the impact is presented to the next meeting of MEPC, which takes place this October.

The challenge now for the Clean Arctic Alliance is to make sure that the momentum continues, and the proposal for a ban continues to be well-supported, and that it remains the central component of the work moving forward so that a ban can be put in place by 2020, or 2021 at the latest

Outside of the IMO, there is growing support for a ban on HFO use and carriage of fuel including a resolution from the Nordic Council, two resolutions from the European Parliament, plus support of a number of industry bodies some of which have signed the Arctic Commitment. The Arctic Commitment has now been signed by over 100 individuals and bodies – the hundred was announced one our events in London. You can see a full list of signatories on the Arctic Commitment website – plus information for signing up.

Dr Sian Prior is Lead Advisor to the Clean Arctic Alliance, Dave Walsh is Communications Advisor

Here’s a good in-depth news story from Radio Canada International about what transpired at MEPC72:

(See also: Five briefing papers on the use of heavy fuel oil in the Arctic). 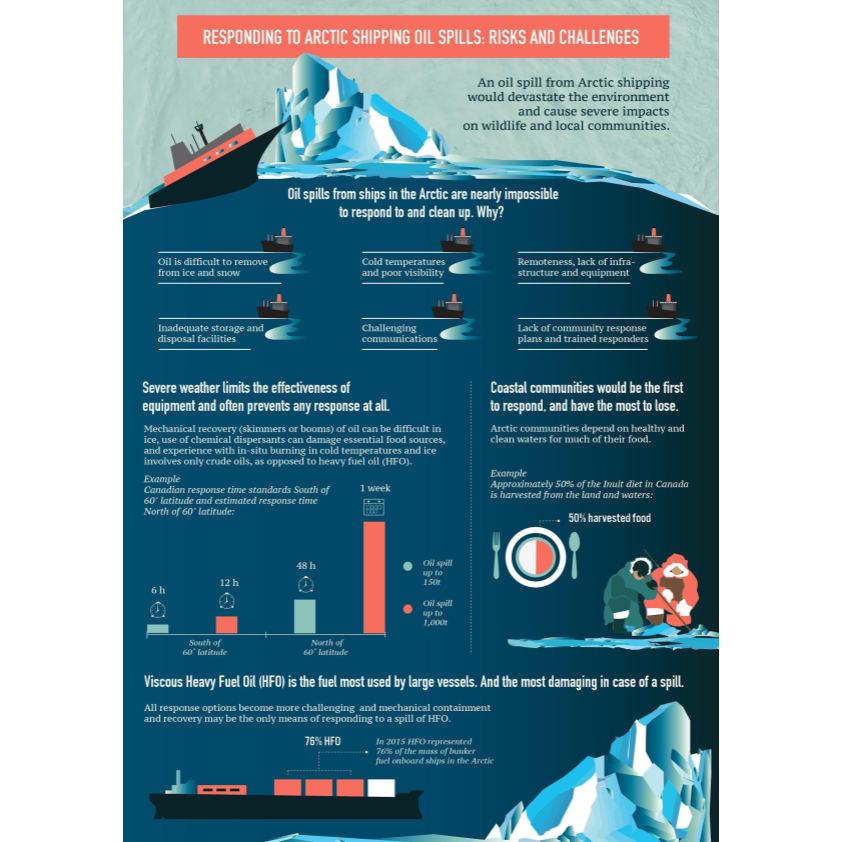 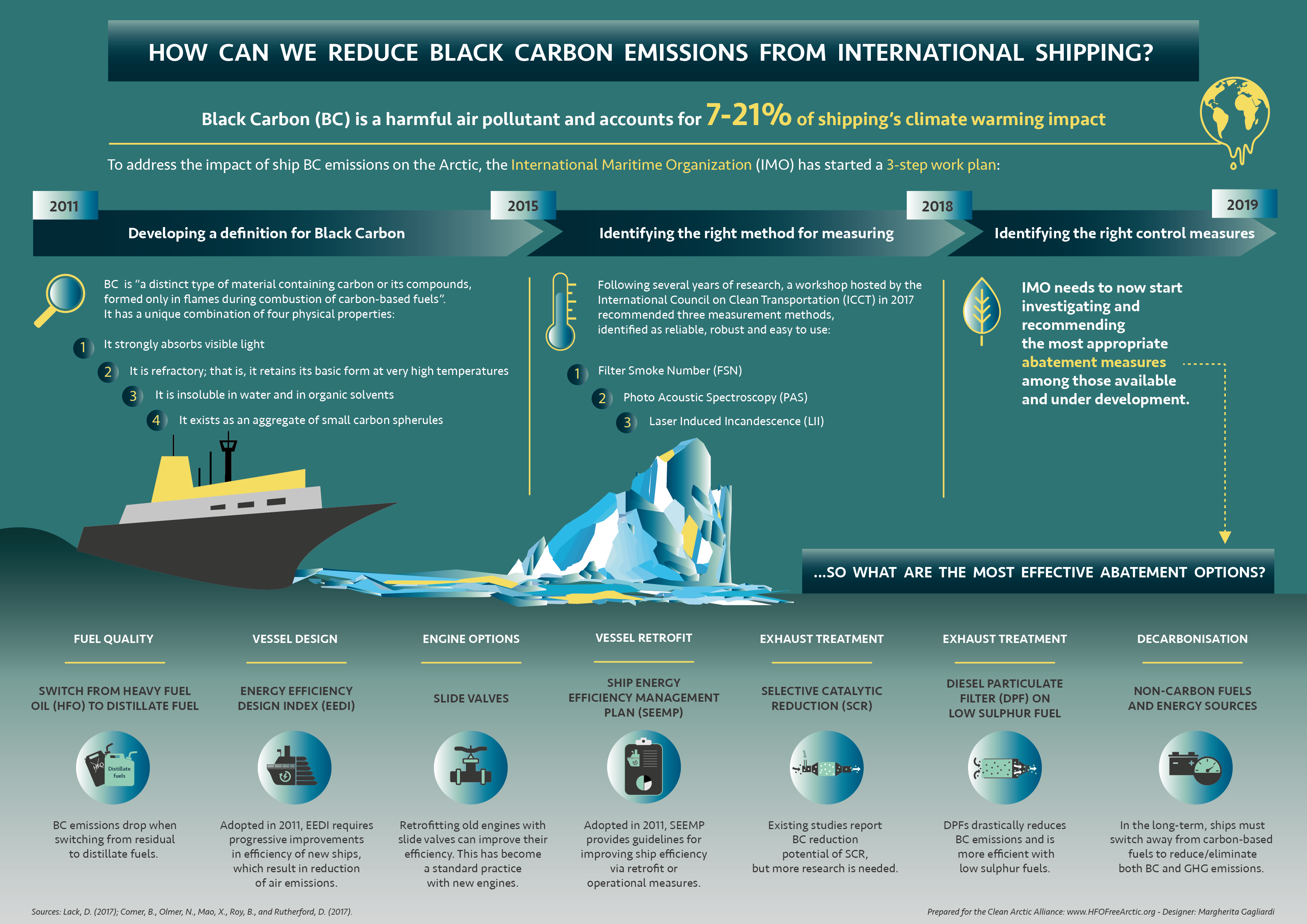 View all our Reports and Infographics