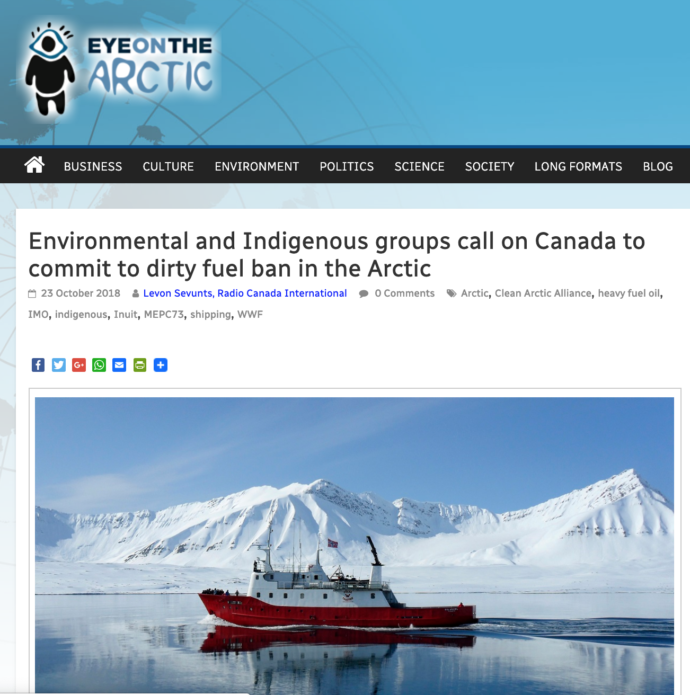 Radio Canada International – Eye on the Arctic: Environmental and Indigenous groups call on Canada to commit to dirty fuel ban in the Arctic

As the world’s maritime body gathers this week in London, a coalition of environmental and Indigenous groups is calling on the federal government to commit to a ban on heavy fuel oil, also known as bunker oil, for ships plying the Arctic.

During the previous meeting of the International Maritime Organization’s Marine Environment Protection Committee (MEPC 72) in April, the majority of IMO members agreed in principle to a proposal by Finland to ban the use and transport of heavy fuel oil (HFO) by ships in Arctic waters by 2021 along with an assessment of the impacts of such a ban on Arctic communities.

The use of HFOs is already banned in the Antarctic.

However, while Canada has not formally opposed an HFO ban,  Ottawa has argued it needs more time to consult with northern Indigenous communities, industry and various levels of governments about the impacts of such a ban.

Andrew Dumbrille, senior specialist in sustainable shipping at WWF Canada, said by not adopting a clear position the HFO ban or phase-out, the federal government is putting Canada’s competitiveness and its maritime shipping at risk.

“The longer you delay sending a clear signal to industry, the more uncertainty there is, the more investments get made that one day may be what’s called ‘sunk assets,’” Dumbrille said in a phone interview from London where he is attending the MEPC73 meeting.

“The federal government needs to send a clear signal to communities, to the regulator and to industry that they’re serious about a ban, they want to commit to a ban.”

Sian Prior, lead advisor to the Clean Arctic Alliance, a coalition of 18 non-governmental organisations working to end HFO use as marine fuel in Arctic waters, said IMO member states must ensure that the Arctic ban on heavy fuel oil is developed by 2020, and adopted in 2021.

“It’s nearly ten years now since the Arctic Marine Shipping Assessment (AMSA) was published by the Arctic Council, which clearly identified oil spills as the greatest threat from shipping in the Arctic,” Prior said in a phone interview from London. “It’s time that we go on with the job.”

Radio Canada International – Eye on the Arctic: Environmental and Indigenous groups call on Canada to commit to dirty fuel ban in the Arctic