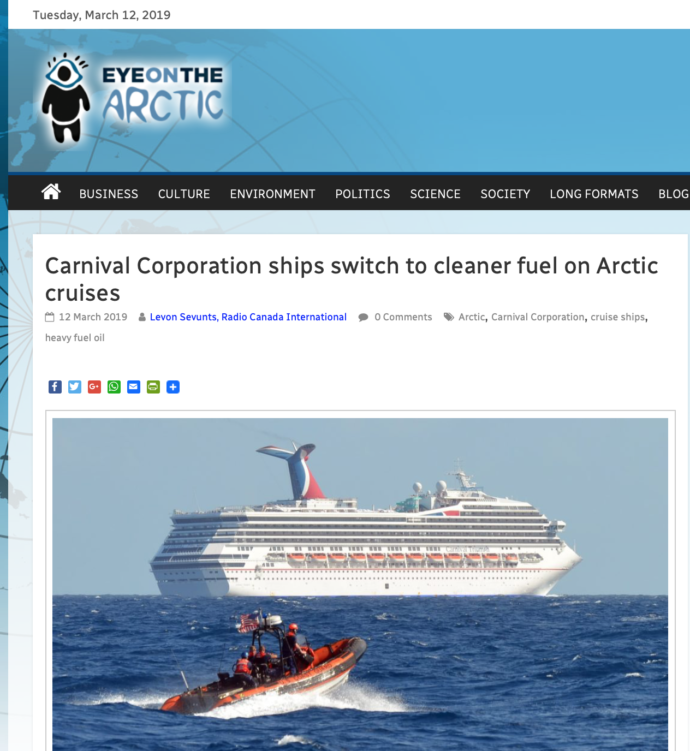 12 March 2019 – In a move applauded by environmental groups, cruise industry giant Carnival Corporation says all of its ships sailing in the Arctic have switched from the highly polluting heavy fuel oil (HFO) to cleaner fuels.

The cruise industry juggernaut, which operates some of the most popular cruise line brands such as Carnival Cruise Line, Princess Cruises, Holland  America Line and Cunard among others, said the switch from heavy fuel oil to low-sulfur marine gasoil (MGO) happened two years ago and has been supported by other commitments.

“Just over a year ago, in response to a question raised about HFO, we made the commitment that we would not use HFO in the Arctic region unless it was purified through our Advanced Air Quality Systems installed on our ships,” company spokesperson Roger Frizzell told Radio Canada International in an email.

“Stand.earth applauds this as an important step in the right direction, and a move that puts the shipping sector on the pathway to a truly heavy fuel oil-free Arctic.”

The next logical step for Carnival would be to ensure that none of its ships traveling to the region are carrying heavy fuel oil onboard, Ulrich added.

“One of the biggest concerns, of course, is spill risk,” Ulrich said in a phone interview from Bellingham, WA.

It is the primary concern of Arctic Indigenous communities and Indigenous organizations such as the Inuit Circumpolar Council (ICC) and the Alaska Federation of Natives, Ulrich said.

“And so while them [Carnival] only burning MGO in the Arctic is a good first step, it doesn’t address one of the primary concerns of Arctic Indigenous peoples and Arctic nations, which is that they are still carrying this dirty fuel on board and in the event of an accident, a spill of heavy fuel oil would be absolutely catastrophic in the Arctic environment,” Ulrich said.

In the interest of transparency, Carnival should release its fuel logs “to show the world it has been, and will continue to be, a leader in getting heavy fuel oil out of this fragile Arctic ecosystem,” she said.

he Clean Arctic Alliance, a coalition of 18 non-profit organizations calling for a ban on the use and carriage of heavy fuel oil in Arctic waters, also welcomed Carnival’s announcement.

“Banning the world’s dirtiest fuel from Arctic shipping is the simplest and easiest way to reduce the risks of long-lasting, damaging oil spills, and will result in a significant reduction in emissions of black carbon, which exacerbates sea ice melt when it settles on snow and ice,” she said. “Now it’s up to Arctic operators to meet Carnival’s challenge, by making the switch to cleaner fuels.”