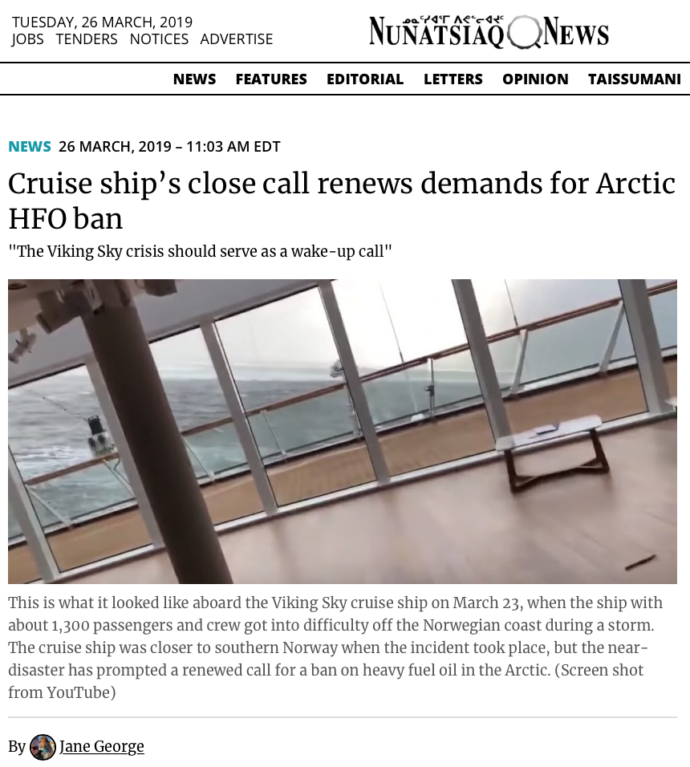 The near-grounding of the cruise ship Viking Sky this past weekend off Norway has renewed concerns about the use of dirty and difficult-to-clean up heavy fuel oil in the Arctic.

The ship, owned by Viking Cruises, experienced engine problems in rough seas on Saturday. After its engines finally restarted, the ship finally reached safe harbour yesterday in Molde, Norway, but not before it nearly grounded on rocks about 900 metres from shore where it had stopped and anchored.

At least 20 of the roughly 1,300 passengers and crew aboard were injured as the cruise ship heaved from side to side, reports say, while several hundred people ended up being evacuated by helicopters.

The incidents prompted a statement by Sian Prior, lead advisor to the Clean Arctic Alliance, a coalition of non-governmental organizations calling for a ban on the use and carriage of HFO as fuel in the Arctic.

“With a new season of cruise ships poised to enter Arctic waters, the Viking Sky crisis should serve as a wake-up call,” Prior said.

Several factors helped avert disaster and ensured the safe return of passengers and crew to shore this weekend, including “very importantly, the proximity of rescue infrastructure,” she said.

The grounding of Viking Sky could have “created a strong risk of an oil spill, which would have been devastating for the environment and local communities,” she said. “This summer, similar cruise ships carrying thousands of passengers will sail in Arctic waters and in other vulnerable regions, far from search and rescue facilities, including helicopters and tugs.”

Prior said the lives of the passengers and crew are at stake as well as those involved in the response and rescue—”which in remote Arctic locations is likely to include Indigenous and coastal communities with minimal or no equipment and training,’ she said. 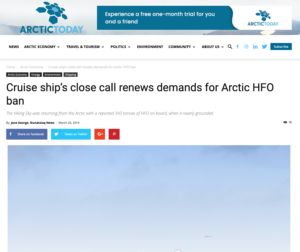