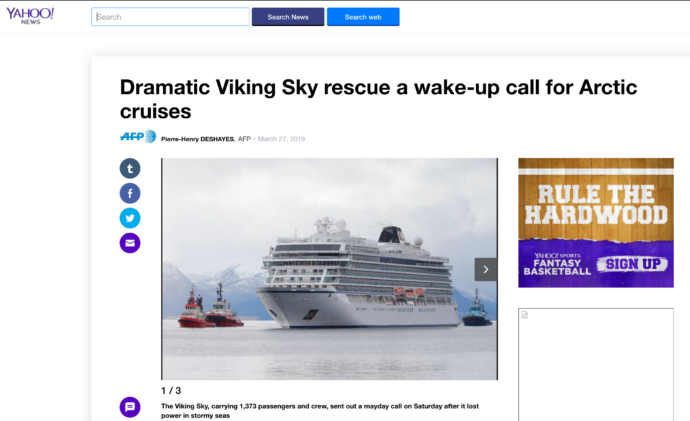 What would happen if a cruise liner suddenly found itself without power in the middle of the Arctic? After narrowly averting a maritime disaster, Norway is mulling the safety of cruise ships in the Far North.

Thanks to well-trained professionals and a good dose of luck, the 1,373 people on board the Viking Sky, the ship that suffered engine failure in stormy seas on Saturday, escaped the experience with just a harrowing tale to tell.

The incident led to a spectacular air rescue operation: almost 500 passengers were winched off the ship by helicopters fighting strong winds, some in the dark.

The vessel, which came close to being swept onto perilous reefs with a potentially catastrophic human and environmental toll, was finally able to make its way to a nearby port, after getting three of its engines running.

The engines are believed to have failed due to low oil pressure, maritime authorities said on Wednesday.

“Most of the people on board the Viking Sky would have died if the ship had run aground, because of the extreme weather conditions, the ship’s movements, a severe list, and a slow evacuation,” said two professors from the University of Trondheim’s department of marine technology.

“This summer, similar cruise ships carrying thousands of passengers will sail in Arctic waters and in other vulnerable regions, far from search and rescue facilities,” lamented Sian Prior, an advisor to the Clean Arctic Alliance campaign.

“In addition to the risk to lives, most of these vessels will be powered by oil-based fuels including heavy fuel oil, which pose a grave risk to the Arctic environment, and to the livelihoods of local indigenous people,” she said.

A heavy fuel oil spill would be “likely to take from months to years to be completely cleaned up.”