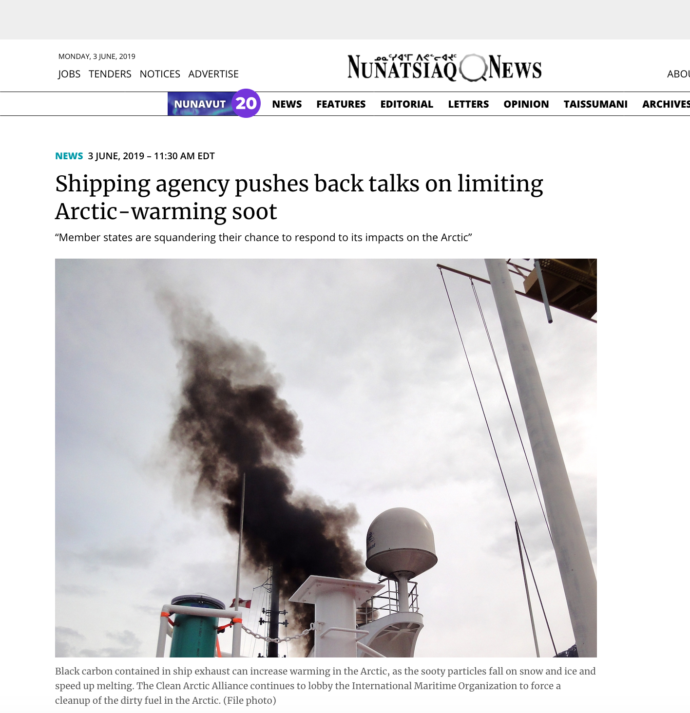 The United Nations agency that oversees the shipping industry has pushed back plans to discuss putting limits on sooty exhaust that’s known to increase warming in the Arctic.

That means it will take longer to eliminate what Willie Goodwin, a member of the Inuit Circumpolar Council Food Security Committee and chair of the Arctic Marine Mammal Council, calls “the second largest contributor to global warming and to the melting Arctic.”

Proposals to limit black carbon emissions will be heard in February 2020, the International Maritime Organization’s Marine Environment Protection Committee decided at a recent meeting in London.

Goodwin had asked the recent IMO meeting to act right away on limiting black carbon.

“My people need action, not in five years, not in two years, but now,” Goodwin said. “Urgent action is needed to rapidly reduce the impact of shipping emissions on the Arctic.

Black carbon is contained in shipping exhaust. It remains in the atmosphere for only a few days to weeks, but it creates problems when it later lands on Arctic ice or snow, where it absorbs heat from sunlight and speeds up melting.

The Clear Arctic Alliance, a coalition of non-governmental organizations, said in a lengthy statement that it was dismayed by the lack of action by the IMO.

“After a decade of debate on black carbon emissions from shipping, IMO member states are squandering their chance to respond to its impacts on the Arctic,” said Sian Prior, the alliance’s lead advisor. 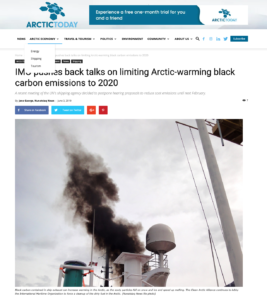