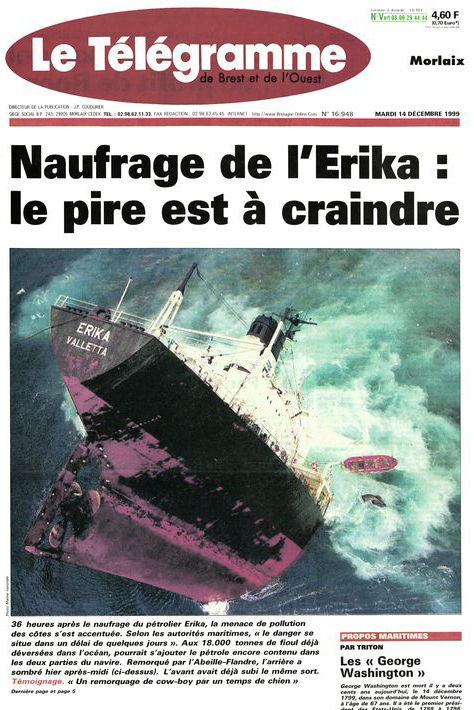 On the 12th of December, 1999, the 25-year old, 184m-long tanker Erika, bound for the port of Livorno in Italy, foundered in heavy weather in the Bay of Biscay off the coast of Brittany before breaking in two and sinking causing one of the worst spills of heavy fuel oil (HFO) ever.  Some 31,000 tonnes of heavy fuel oil was spilled, resulting in 74,000 oiled birds along the coast of France and Northern Spain. Apart from severe ecological impact, the spill polluted of 400 kilometers of coastline and had considerable impact on local fisheries, shellfisheries, businesses and tourism. The total compensation costs agreed upon in the course of several court cases totalled €203.8 million. The Erika sunk close to the ports of Brest, Lorient and Sant-Nazaire with readily available personnel and oil spill response equipment. But due to poor weather conditions, very little oil could be “skimmed” from the ocean surface – in fact, just 3% of the oil spilled was collected at sea.

An oil spill in more remote regions, in more extreme conditions, far from any major response equipment or personnel would be even more difficult to deal with. In February 2020, delegates of the International Maritime Organization (IMO) will meet in London to discuss a ban on the use and carriage of HFO as fuel on all ships operating in the Arctic. While the IMO’s focus is on addressing the risk of fuel oil spills, rather than spills of HFO cargoes, there is plenty of evidence that these smaller spills can be devastating to local communities and virtually impossible to clean up in remote locations.

In December 2004, the Selendang Ayu bulk carrier lost power, grounded and broke in two with the loss of six lives, causing a heavy fuel oil spill of 1,200 tonnes in the Aleutian Islands, Alaska. The nearest settlement was 50km away and the response was coordinated from Kodiak, 1,000km away. The clean-up couldn’t be initiated until the spring of 2005, when it was determined that 113km of shoreline required clean-up. Liquid waste was airlifted out, and the solid waste which filled 600 containers was shipped out. The spill resulted in the closure of local fisheries while the costs for clean-up, wreck removal, lost fishing income, beach monitoring and fines amounted to US $ 112 million.

In February 2018, 12,000 litres of heavy fuel oil spilled into the Shuyak Strait off Kodiak Island, when a building collapsed during a storm, causing a rubber storage tank to rupture. Bad weather hampered the initial response; booms were deployed and 1,878 bags of waste were collected during the clean-up, which cost around US $9 million.

Also in 2018, a relatively small HFO spill occurred in the Port of Rotterdam, when the chemical tanker Bow Jubail, punctured a fuel tank, leading to hundreds of oiled birds, despite the necessary response equipment being on hand. In February 2019, the MV Solomon Trader, a bulk carrier, ran aground on a reef in the Solomon Islands, spilling around 80 tonnes of HFO, resulting on health impacts within local communities, and people were warned against eating locally caught fish. Months of clean-up operations had overall costs expected to reach between US $30m – $50 million.

Using and transporting HFO is risky business. It was banned in the Antarctic in 2011, but despite an Arctic Council report concluding that ‘the most significant threat from ships to the Arctic marine environment is the release of oil through accidental or illegal discharge’, and a follow-up report concluding that the use of distillates instead of HFO as fuel would achieve significant spill risk reduction, protection has yet to be finalised for the Arctic.

In February 2019, following a proposal for a ban submitted in 2017 by eight IMO Members, the IMO’s Pollution Prevention & Response sub-committee will need to complete the work to develop a ban on the use and carriage of HFO as fuel by ships operating in the Arctic. The anniversary of the Erika HFO spill serves as a stark reminder of the need for urgent action to protect the Arctic from HFO spills, while the recent evidence from fuel oil spills demonstrates that only a few hundred tonnes of HFO could easily lead to an ecological disaster in the Arctic.

Dr Sian Prior is Lead Advisor to the Clean Arctic Alliance.

This article was first published by Lloyds List: The Erika heavy fuel oil spill — 20 years on