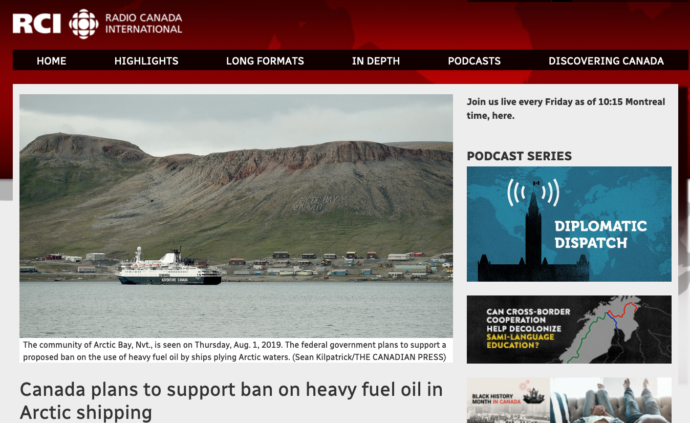 Canada will support a ban on the use of heavy fuel oil by ships plying Arctic waters at the upcoming meeting of the International Maritime Organization (IMO) in London, Transport Canada officials announced during a teleconference call Wednesday, according to people who participated in the call.
…
“Transport Canada’s announcement to support an HFO ban in the Arctic is very encouraging news ahead of the tough negotiations at the IMO next week,” said [Andrew Dumbrille [Andrew Dumbrille, a World Wildlife Fund – Canada specialist in sustainable shipping – WWF is a Clean Arctic Alliance member.]. “Canada is showing vision and leadership in creating a pathway for cleaner shipping in the Arctic and globally.”

Transport Canada should be commended for working towards protecting the marine environment and ensuring communities have access to a clean ocean for food and culture, Dumbrille said.

HFO spills as a result of an accident present a big threat to the Arctic environment, according to experts.

HFO has a high viscosity and density and does not evaporate quickly, and can stay in the environment for a long time, according to the Canadian submission.

“The persistence of HFO means that there is a higher likelihood of physical fouling and ingestion of oil by marine wildlife,” the report says. “An HFO spill would also present possible shoreline contamination, threatening wildlife and traditional activities of Indigenous and Inuit populations, who may become exposed to the contamination directly or indirectly.”

Clean-up efforts will be particularly challenging given the cold environment, the enormous distances and the lack of infrastructure and resources to mount a quick response, the report notes.

Dumbrille said the commitment to banning HFO from Transport Canada is going to provide certainty for all involved and prepare operators and communities for the eventual ban.

“Everyone wants a ban implemented that doesn’t burden communities with higher costs — that’s a given,” Dumbrille said. “What’s needed now is for the federal government to step up and commit to managing the transition by ensuring any potential costs associated with banning HFO don’t impact people in the north.”