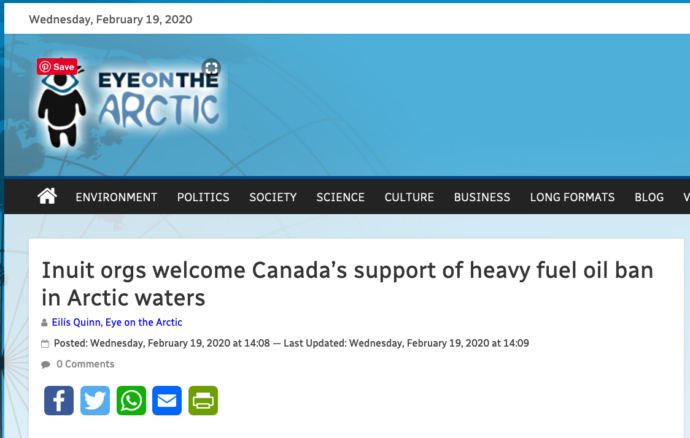 Canada’s support of an international ban of heavy fuel oil (HFO) in Arctic waters is an important step to safeguard the long-term future of indigenous communities in the North, two Inuit organizations say.

“Transport Canada’s recent announcement to support an HFO ban in the Arctic demonstrates vision and leadership and is very encouraging,”  the Canadian chapter of the Inuit Circumpolar Council (ICC) and Nunavut Tunngavik Incorporated (NTI) said in a joint news release on Tuesday.

The Clean Arctic Alliance, a coalition of several not-for-profit organizations, including the WWF and Greenpeace among others, that are campaigning for the IMO to implement a legally binding ban of heavy fuel oil in Arctic waters, welcomed Canada’s announcement on Tuesday but dismissed the government’s preference for a gradual approach saying the environmental stakes were too high.

“Canada is to be commended for working towards protecting the Arctic marine environment while (ensuring) communities have access to a clean ocean for food and culture – but given the threats from using heavy fuel oil, there should be no delay to the introduction of a ban,” said Andrew Dumbrille, the senior sustainable shipping specialist at WWF Canada.

“The Canadian government must support implementing a ban without delay, and immediately shoulder any potential costs associated with switching away HFO so that people in Northern communities are not impacted.”