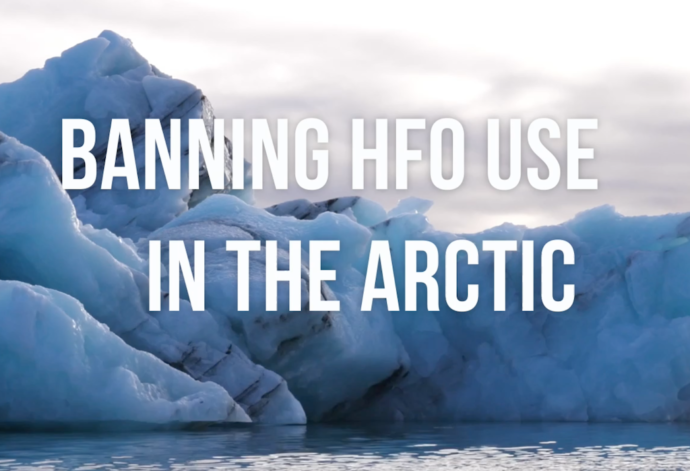 Copenhagen, 6 July 2020:- Responding to a new report to the Nordic Council on “Reducing risks and increasing environmental security in Arctic Waters”, the Clean Arctic Alliance, the Iceland Nature Conservation Association and Green Transition Denmark welcomed its publication, urging Nordic Ministers to support its recommendations to ban the use of heavy fuel oil (HFO) in the Arctic and to minimize damaging emissions of pollutants that accelerate the melting of Arctic ice, such as black carbon [1,2].

The report, funded by the Nordic Council of Ministers and authored by Nauja Bianco of Isuma Consulting, outlines in the first paragraph of its Executive Summary the “evident risks to human safety and environmental security related to an increase of shipping in the Arctic”, including “carriage and transport of Heavy Fuel Oil (HFO) and toxic hybrid fuel oils, use of HFO and atmospheric emissions”.

Of the report’s 12 recommendations to the Nordic Council, the first calls for “Nordic cooperation on enforcement of stricter grade oil requirements to mitigate risks related to oil spills from carriage and transport of Heavy Fuel Oil (HFO) and toxic hybrid fuel oils” and proposes that “work should be undertaken to ban HFO in the Arctic, while simultaneously supporting development of new, less toxic and more energy-efficient and sustainable fuel types to replace HFO globally.” It also recommends Nordic promotion of regulations preventing environmentally harmful shipping emissions in order to minimize damaging emissions, including reduction of sulphur concentration and other accelerating ice-melting pollutants.

“We urge Nordic ministers to not only heed the sage advice detailed in this report on the need to ban heavy fuel oil from Arctic shipping, but to also take a strong lead on promoting an effective implementation of a ban at the International Maritime Organization”, said Dr Sian Prior, Lead Advisor to the Clean Arctic Alliance. “Ridding the Arctic of heavy fuel oil will not only protect Indigenous communities and wildlife from the horror of oil spills, along with its climate and health damaging pollution impacts, but moving to relatively cleaner fuels will enable efficient particulate filters to be used which will dramatically reduce emissions of black carbon.”

“The Nordic countries have a long tradition of promoting marine conservation, including carbon neutrality; Nordic governments must now build on this tradition, by strengthening their support for a ban on HFO”, said Arni Finnsson of the Náttúruverndarsamtök Íslands (Iceland Nature Conservation Association (INCA)).

“Banning HFO in the Arctic is a first step towards responsible Arctic shipping; by moving to distillate fuels, ships could retrofit particulate filters and eliminate emissions in the climate-sensitive and ice-covered Arctic region, which is already warming much faster than the rest of the planet”, said Kåre Press-Kristensen of Det Økologiske Råd (Green Transition Denmark), a member of the Clean Arctic Alliance.

[1] Reducing Risks and Increasing Environmental Security in Arctic Waters, June 2020: How can the Nordic countries enhance cooperation? Nauja Bianco, Isuma Consulting https://pub.norden.org/temanord2020-506/ [2] “The Nordic Council of Ministers and the Nordic Council are the main forums for official Nordic co-operation, which involves Denmark, Finland, Iceland, Norway, Sweden, the Faroe Islands, Greenland and Åland. Our vision is to make the Nordic region the most sustainable and integrated region in the world.

Already banned for nearly a decade in Antarctica and in some of the waters around the Arctic archipelago of Svalbard, heavy fuel oil is a viscous and polluting fossil fuel that powers ships throughout our seas and oceans – accounting for 80% of marine fuel used worldwide. Around 75% of marine fuel currently carried in the Arctic is HFO. If HFO is spilled in cold polar waters, it is likely to break down very slowly, and prove almost impossible to clean up. A HFO spill would have long-term devastating effects on Arctic indigenous communities, livelihoods and the marine ecosystems they depend upon. As sea ice melts and opens up Arctic waters further, even larger non-Arctic state-flagged vessels running on HFO are likely to divert to Arctic waters in search of shorter journey times, greatly increasing the risks of HFO spills. Already four of the top five flags, based on volume of HFO on board as fuel, originate from outside of the Arctic region – Panama, Marshall Islands, Liberia, and Singapore – with Russia the Arctic nation.

Burning HFO produces black carbon particles which are emitted in the exhaust fumes. When they fall on snow, on glacier ice and sea ice, the reflectivity (albedo) is reduced and the absorption of heat increases. More Arctic shipping using HFO will lead to increased black carbon emissions, fueling an already accelerating feedback loop.

The threat from oil spills on Arctic ecosystems and livelihoods is real, as are the impacts of climate change on the Arctic, and the knock-on effects of those impacts on the rest of the planet. The Arctic is under pressure – climate change is fuelling temperature rises double the rate of further south. In early March 2020, it was reported that ice loss from the ice caps of Greenland and the Antarctic are “tracking the worst-case scenario”, losing ice six times faster than in the 1990s. In 2019, in just two months, the loss of 600 billion tonnes of ice from Greenland raised global sea level by 2.2mm.

A ban on the use and carriage of HFO as fuel in Arctic waters is under consideration at the International Maritime Organization (see notes), but is so weak that the Clean Arctic Alliance believes that very few ships would be required to stop using HFO when it takes effect, and that the volumes of HFO used and carried in the Arctic could increase even after the ban comes into effect. The Clean Arctic Alliance is calling for a better, more efficient ban than the one currently on the table, with no exemptions and no waivers so that HFO is removed from the Arctic from 2024.

Note: Iceland’s waters are not included within the boundaries of the Arctic HFO ban but are adjacent to the waters defined by the IMO’s Polar Code as Arctic waters – the Clean Arctic Alliance and the Iceland Nature Conservation Association recently called for a ban on HFO in Icelandic waters.

An initial examination by the Clean Arctic Alliance of the draft regulation by the Clean Arctic Alliance suggests, based on current Arctic shipping levels, that loopholes in the text could mean over three-quarters of the HFO currently used in the Arctic could be exempt or delayed from implementing the regulation, which equates to more than two-thirds of the HFO carried on board vessels as fuel.

Of further concern is that these loopholes will cause an increase in HFO use and carriage in the Arctic. HFO use is already on the increase– between 2015 and 2017 there was a 30% increase in the numbers of ships operating on HFO and a 55% increase in the amount of black carbon emitted from the use of HFO – and this is likely to carry on rising [1]. In addition, the loopholes will mean that as older ships (required to implement the regulation in 2024) are replaced with new ships with double-hulls or protected fuel tanks (not covered by the regulation until 2029), so the amount of HFO used and carried in the Arctic, along with black carbon emissions will increase.