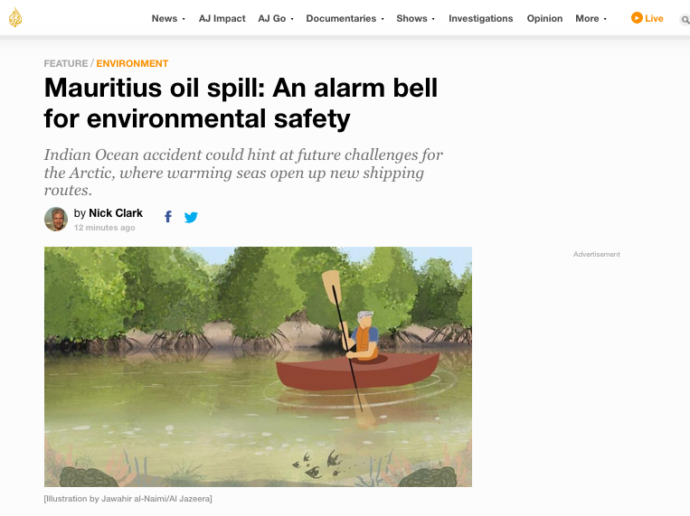 The Clean Arctic Alliance (CAA) has been campaigning for the ban of the use of heavy fuel oil in the Arctic, saying as sea ice continues to melt away Arctic waters are becoming increasingly navigable to vessels and the potential for accidents grows.

“The spill in Mauritius demonstrates the limitations of response operations to cope with heavy fuel oil spills even in relatively favourable conditions,” said Dave Walsh of the CAA.

“It underlines the need for the shipping industry to move away from powering vessels with fuels which pollute the air when they are burned and the ocean when there is an accident.”

Heavy fuel oil has already been banned in Antarctic waters, where commercial shipping routes are few and far between. Given recent experience in the Indian Ocean, it would seem that ban should extend at the very least to the northern polar extreme as well.

Or as Walsh said: “What has happened in Mauritius is not an isolated incident, but part of a pattern of unacceptable behaviour by an industry that routinely puts commercial considerations ahead of safety and the environment.

“Put simply, the shipping industry must find a way towards an exit from the age of dirty fossil fuel-powered shipping.”