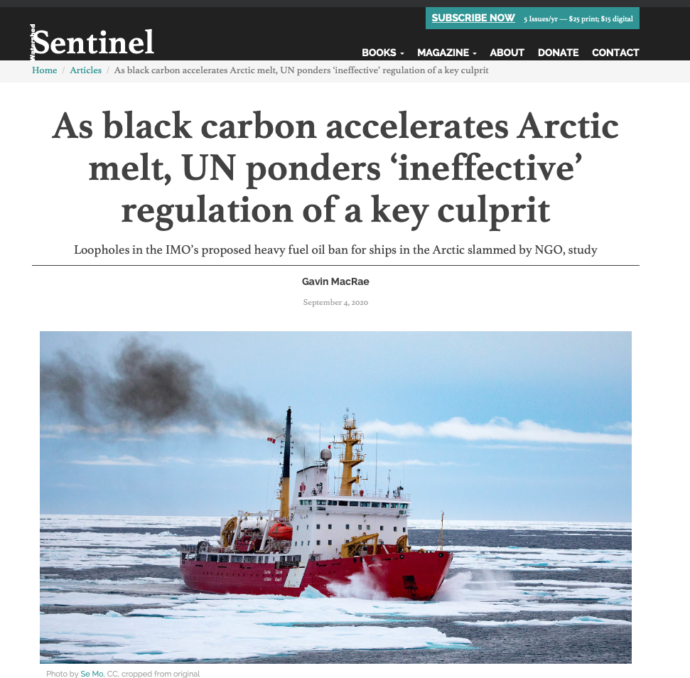 With Canada’s last intact ice shelf recently collapsed, a June heatwave that roasted Siberia with temperatures over 37.8ºC, and Greenland’s ice sheet now losing a half-teratonne of ice yearly, it’s no wonder researchers now predict the Arctic could be ice-free in summer in less than 15 years.

And while the majority of the anthropogenic heating in the Arctic (which is occurring at a rate over twice the global average) can be attributed to plain old carbon dioxide, a host of secondary climate forcers, called short-lived climate pollutants, aid CO2 like sidekicks helping a villain. They don’t stay in the atmosphere nearly as long as carbon dioxide, but molecule for molecule are far more potent. Short-lived climate pollutants include methane, black carbon, tropospheric ozone and hydrofluorocarbons.

It’s the type of measure the International Maritime Organization (IMO), the United Nations’ body that regulates shipping, has been pondering. For thirteen years.

“It’s been over a decade now that the International Maritime Organization has been discussing what to do about black carbon, or what it is, how you measure it, and ultimately how to reduce the emissions of it,” says Dr. Sian Prior, lead advisor to the Clean Arctic Alliance, a coalition of 18 environmental NGOs. “The solutions are actually relatively simple compared to some climate forcing gasses. We have alternatives available. They are cleaner, they’re not clean. They still produce black carbon, the most popular one anyway, diesel or distillate fuel. But if you combine moving to a cleaner fuel producing less black carbon, with the installation of a particulate filter, you can reduce your black carbon emissions dramatically…. There is a cost obviously associated with doing that, but in terms of the total impact that black carbon is having on the climate generally and the Arctic specifically, it’s almost a no brainer.”