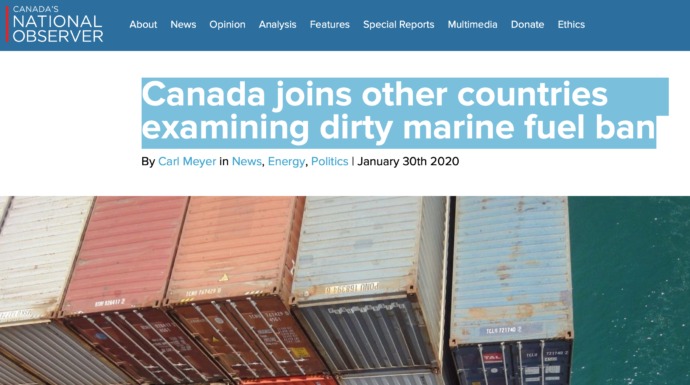 The IMO put new rules in place starting Jan. 1 that are meant to stop ships from burning sulphur-rich fuel, which produces sulfur dioxide that is harmful to the eyes and lungs, creates acid rain and is linked to hundreds of thousands of deaths each year. Canada’s marine-safety inspectors are currently enforcing this rule.

But in an ironic twist, the environmentally-friendly move could have the effect of unleashing another problem, according to the Clean Arctic Alliance, a coalition of environmental groups that includes Greenpeace and Stand.Earth.

They say that the new, alternative fuel blends being marketed by oil and gas companies as a way of complying with the IMO’s sulphur cap, known as “very low sulphur fuel oil” or VLSFO, release greater amounts of black carbon when burned.

The use of these types of fuels “will lead to a massive increase in black carbon emissions” that will “both accelerate the melting of Arctic sea ice and have a major impact on Earth’s climate,” argued the alliance’s lead advisor Sian Prior.

A coalition of environmental groups say the use of alternative fuels to comply with a crackdown on sulphur may unintentionally “accelerate the melting of Arctic sea ice and have a major impact on Earth’s climate.”