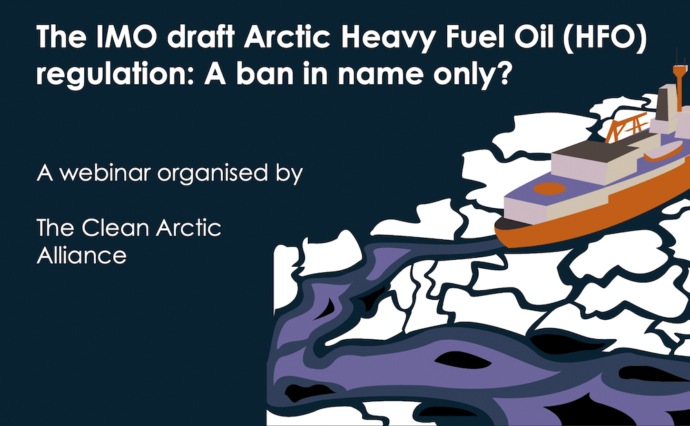 A Ban in Name Only: Implications of the IMO’s Draft Heavy Fuel Oil Ban in the Arctic

London, 12 October 2020:- During the Clean Arctic Alliance webinar held on September 28, The IMO draft Arctic Heavy Fuel Oil (HFO) regulation: A ban in name only?, the speakers explored the social and legal implications of the International Maritime Organization’s draft Arctic HFO regulation if adopted as currently drafted, and what it will mean for Arctic environmental protection. A video recording of the webinar can be viewed here.

In light of the inadequacies identified in the course of the webinar, the Clean Arctic Alliance does not support the International Maritime Organization (IMO) Arctic HFO regulation (or ban) as currently drafted and is calling on IMO Member States to modify the draft regulation before it is approved. It is essential that the ban on HFO use and carriage as fuel in the Arctic is “fit for purpose” and enters into force quickly and provides the Arctic with the level of protection that it so desperately and urgently needs.

Under the draft IMO Arctic HFO regulation, exemptions and waivers will allow 74% of HFO-fueled ships to continue using HFO in the Arctic until mid-2029. As a result, only 30% of HFO carriage and 16% of HFO use will be banned under the current proposal and it is likely that the amount of HFO carried and used in the Arctic will actually increase following the ban taking effect in 2024.

In addition, according to legal advice provided to the Clean Arctic Alliance, the waiver raises some serious concerns. The regulation is not flag-neutral, and this will have negative environmental consequences. It will result in lower environmental standards in Arctic territorial seas and exclusive economic zones than in the Arctic high seas areas, and create a two-tier system of environmental protection and enforcement. It could also maintain the risk of a catastrophic HFO spill in Arctic waters and fail to address trans-boundary pollution risks.

The Clean Arctic Alliance has been campaigning for the IMO to adopt an effective ban on the use and carriage of heavy fuel oil from Arctic shipping. If adopted as currently drafted, The Clean Arctic Alliance believes that it will be a ban in name only. The draft Arctic HFO ban regulation will be discussed again during a meeting of the IMO’s Marine Environment Protection Committee in November 2020 (MEPC75).