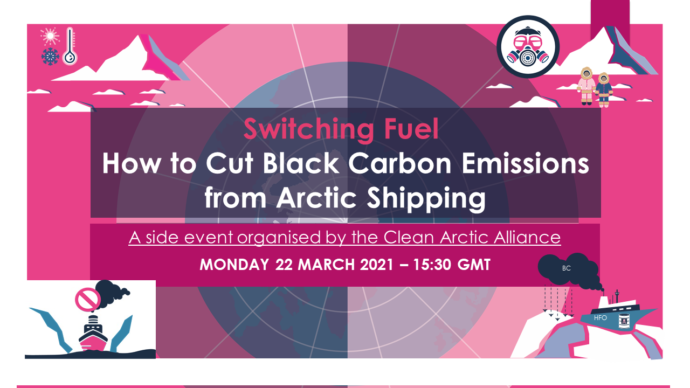 Arctic sea ice, glaciers, permafrost and the Greenland ice sheet are all decreasing rapidly due to global heating, leading to global impacts such as sea-level rise and extreme weather patterns.

Against the background of the unfolding Arctic climate crisis, the Clean Arctic Alliance invites you to join an online event to explore how Arctic shipping can help alleviate the changes occurring in  the Arctic, and to pose this question: Can a switch to alternative, cleaner fuels contribute to reducing black carbon emissions from Arctic shipping?

This is an important issue: Black carbon is on the agenda of the IMO’s Sub-Committee on Pollution Prevention and Response 8th Session (PPR 8) which takes place between 22-26 March.

Black carbon emissions from ships leads to intense warming when suspended in the atmosphere over snow and ice. Black carbon’s warming impact is 7 to 10 times greater when it comes to rest on snow or ice in the Arctic, as it reduces the reflectivity (albedo) and absorbs heat, which accelerates Arctic melt. The ongoing loss of multi-season sea ice is likely to open up Arctic waters to increased shipping – which could lead to more black carbon emissions, fueling an already accelerating feedback loop. Worldwide, black carbon contributes 7-21% of shipping’s climate warming impact, along with other factors, such as greenhouse gases.