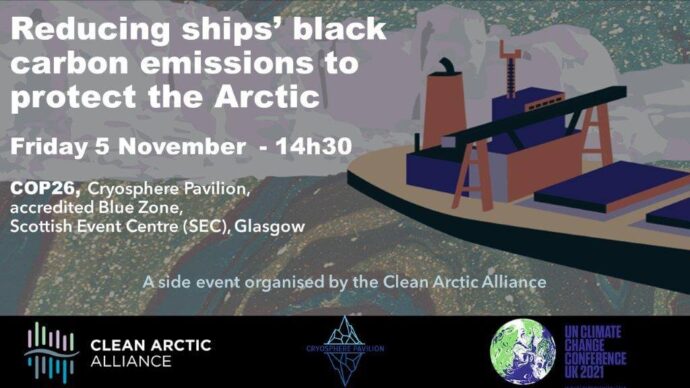 To attend in person: no registration needed (apart from COP26 UNFCCC accreditation)

Due to a warming climate, major shifts in climate are occurring more strongly and proceeding faster at high latitudes, with the most dramatic changes seen in the sea-ice cover of the Arctic Ocean. Compared to a few decades ago, Arctic summer sea ice cover is much reduced, and the remaining ice is about half as thick. Multi-year ice has declined by around 90%. Days with no summer sea ice could come as soon as the early 2030s, if world leaders fail to fulfil the Paris Climate Agreement’s commitment to limit global heating to less than 1.5C.

As reduced sea ice opens up access to resources, and interest in shorter trans-Arctic shipping routes grows. Despite global efforts, ships’ black carbon (BC) emissions are rising – BC emissions from shipping in the Arctic increased 85% between 2015 and 2019. When black carbon settles onto snow and ice, melting accelerates, and the loss of reflectivity creates a feedback loop exacerbating global heating. Black carbon also has health impacts for local communities. However, reductions in black carbon emissions from shipping in or near the Arctic can be introduced rapidly and have an immediate impact in reducing melting of snow and ice.