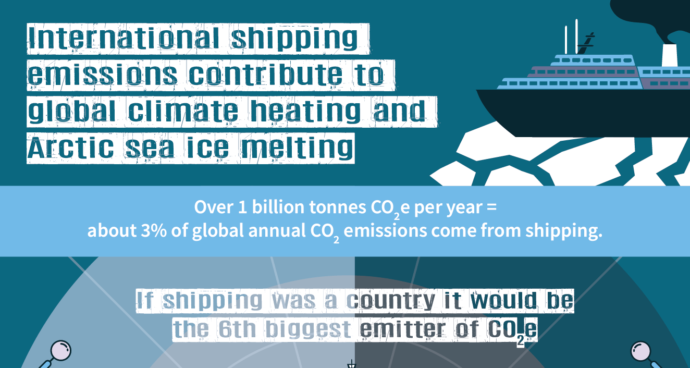 Glasgow, 1 November 2021: As world leaders gather for the COP26 UN climate summit in Glasgow, the Clean Arctic Alliance is calling for them to take action to preserve the crucial climate regulation ability of Arctic sea ice, by fulfilling the Paris Climate Agreement’s commitment to limit global heating to less than 1.5C.

“World Leaders have two weeks to agree on action that will honour the Paris Climate Agreement and arrest the Arctic meltdown”, said Sian Dr Prior, Lead Advisor to the Clean Arctic Alliance. “Any outcome that heats the planet beyond 1.5C is to risk summers with days completely free of sea ice as soon as the early 2030s, which would be disastrous for the global climate.”

The Clean Arctic Alliance also called on the International Maritime Organization (IMO) – the UN body tasked with regulating shipping to adopt reduction measures to set the maritime sector’s emissions on a pathway compatible with the Paris Agreement’s goal of keeping warming below 1.5C, and to achieve full decarbonisation of the shipping sector by 2035.

“In line with decisions that must be made atCOP26 to honour the Paris Agreement, the IMO, during its Marine Environment Protection Committee (MEPC 77) meeting later this month, must urgently put in place strong measures to drive fast deep cuts black carbon emissions from shipping operating in or near the Arctic, and to urgently reduce CO2 as well as black carbon emissions from the maritime sector globally”, said Prior.

“A proposal for a resolution calling on ships operating in and near the Arctic to move from heavier, more polluting fuel oils to lighter distillate fuels has been submitted to MEPC 77 by eleven IMO Member States”, she added [1]. “If all shipping currently using heavy fuel oils while in the Arctic were to switch to distillate fuel, there would be an immediate reduction of around 44% in black carbon emissions from these ships.”

The Alliance also called for inclusion of a 1.5 degree-compatible 6-7% annual improvement in carbon intensity in the IMO’s new short-term measure, and for the United Nations international shipping body to revise its climate targets to ensure full decarbonisation of shipping well before 2050. See infographic: International Shipping emissions contribute to global climate heating and Arctic sea ice melting. 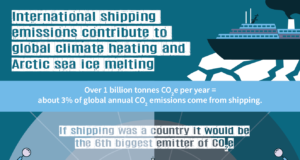 “The recent IPCC findings make the levels of climate ambition and timelines currently on the table for shipping at the IMO totally inadequate”, continued Prior. “It is imperative that measures due for adoption at the IMO’s Marine Environment Protection Committee (MEPC 77) be strengthened to ensure they drive fast deep cuts in CO2 and black carbon emissions from ships, especially those visiting the Arctic.

The IPCC climate report, published on 9 August 2021, found that warming of 1.5 degrees and 2 degrees will be exceeded globally during the 21st century unless deep reductions in CO2 and other greenhouse gas emissions occur by 2030. Arctic sea ice, glacier loss, and Greenland ice sheet loss are included amongst the most certain and severe impacts of global heating, while polar ice sheet loss and sea level rise present some of the greatest threats [2]. Earlier this year, Arctic Foreign Ministers announced that the Arctic has already warmed by three degrees [3].

About the Arctic and Black Carbon 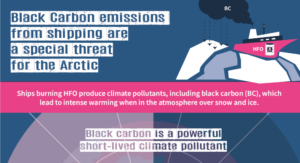 Major shifts in climate occur more strongly and proceed faster at high latitudes with the most dramatic changes seen in the sea-ice cover of the Arctic Ocean. The summer sea ice cover is much reduced compared to only a few decades ago, and the remaining ice is about half as thick. Multi-year ice has declined by around 90%. Days with no summer sea ice could come as soon as the early 2030s, if the world fails to fulfil the Paris Climate Agreement’s commitment to limit global heating to less than 1.5C, which could have unprecedented consequences for the global climate and marine environment.

How Black Carbon Emissions from Shipping Impact The Arctic 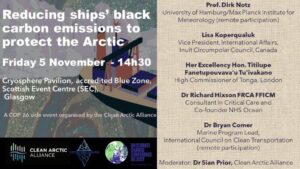 To attend in person: no registration needed (apart from COP26 UNFCCC accreditation)

To join by livestream: details for livestreaming for the event will be available the day before. Email [email protected] to find out more

[3] Reykjavik Declaration 2021, On the occasion of the Twelfth Ministerial meeting of the Arctic Council

Made up of 21 not-for-profit organisations, the Clean Arctic Alliance campaigns to persuade governments to take action to protect the Arctic, its wildlife and its people.