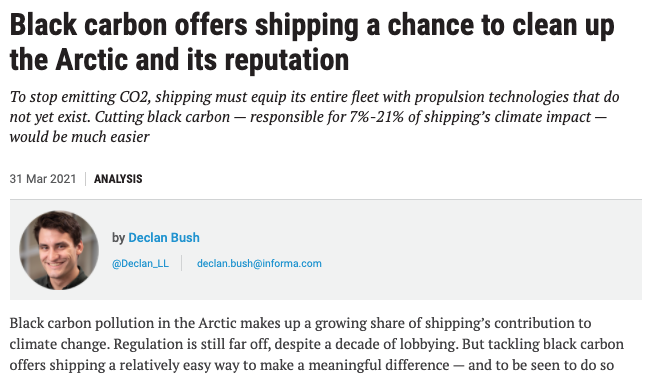 Lloyds: Black carbon offers shipping a chance to clean up the Arctic and its reputation

To stop emitting CO2, shipping must equip its entire fleet with propulsion technologies that do not yet exist. Cutting black carbon — responsible for 7%-21% of shipping’s climate impact — would be much easier.

“What is emitted from shipping in the Arctic is almost certainly all going to stay in the Arctic, which means at least some of it is going to be deposited locally and then have an impact on warming,” said Pam Pearson, a former US diplomat, now director of the International Cryosphere Climate Initiative (A Clean Arctic Alliance Member).

Black carbon’s warming effect is stronger in the Arctic than elsewhere, and shipping is emitting more of it, while other man-made sources decrease.

“Ships are really the only source of black carbon that are sometimes literally breaking through the ice and emitting black carbon at the same time,” said ICCT marine programme lead Bryan Comer.

Dr Comer said added to this, 72% of the heavy fuel oil burned in the Arctic was from four-stroke engines, which emit more black carbon per unit of energy than the two-stroke engines that power bigger ships.

“The trend is the wrong way, both globally and in the Arctic,” he said.

Emissions could be be cut further if ships used exhaust treatments like particulate lters and electrostatic precipitators, she added.

“We could actually achieve something very quickly if we were to switch to lighter or cleaner forms of fuel, or even move away from fossil fuels altogether,” she said.

Mr [Austin] Ahmasuk said black carbon was a global problem and there were many aspects to be managed.

However, he said cutting emissions could buy more time “to protect Arctic indigenous people… and Arctic ecosystems from the impact of melting”.

Continue reading: Black carbon offers shipping a chance to clean up the Arctic and its reputation